What’s your mantra? Does it line up with what you want it to be?

I use the term ‘mantra’ lightly, as it’s not necessarily a prayer or incantation I refer to, but the definition that says it’s is simply an often repeated word or phrase.

To me, your mantra is the word or phrase your mind plays back to you regularly. For example, one might hear her own voice daily declaring, “I’m so fat, I’ll never lose this weight….” Or, one might hear her inner voice telling her something like, “I’m powerful, positive, healthy and strong!”

Which voice is likely to empower you and help you to get the most out of your day? Which is likely to take you in the right direction?

We may think we have a positive mantra because we want to be a positive person. But, if things aren’t going as we want them to, or if people are less than enthusiastic about hanging out with us, maybe we’d better take a closer listen to what we tell ourselves every day.

Admittedly, it can be hard to make a positive profession about our weight when our jeans get tighter every time we put them on. When everything around us seems to be going wrong, it’s not always easy to declare, in a whisper, that we are successful, happy people.

We too often tend to look at our circumstances, and then – access the situation. Our attitude can change our situations!

No one else knows your secret thoughts, your hidden fears. Well, accept God Himself. We can become masters of deceit when we don’t want the people around us to know how we feel or what we’re thinking.

Never really thought of yourself as deceitful? Me neither. But, who are we deceiving more, those who surround us, who love us – or ourselves?

Walk past a picture window and glance at your reflection. What’s your immediate response? Yes, the one that flashes through your mind before you clean it up to tell me about it.

Granted, if your physique isn’t something you struggle with, that might be a bad example.

Maybe you view the people around you as more powerful than yourself. Maybe you’re intimidated by them. When the man from the next office over strides by with his shoulders back like he owns the world, does that bother you?

Or maybe, you think you’re better than him. Maybe your ego shouts over any voices of intimidation.

Okay, so maybe I’m coming up with bad examples. What comes to your mind?

Where is it hard to say something nice about yourself? Where do you find it hardest to take compliments? Where is it most difficult to believe what God says about you?

It just could be that the soundtrack playing your mantra has become so familiar to you, that you don’t consciously hear it anymore. But, it’s still feeding you a lie. And the part of you that’s being fed that lie is the part of you you’re least comfortable with, it may even embarrass you.

So, take a minute to listen. Hear what you say to yourself every day. The best place to listen is in front of a mirror. Write it down. Is it good? Is it something you’d proudly share with others?

Within the secrets of successful people is tucked away a precious nugget that says they can be who they want to be, because they already see themselves that way.
If I see myself as fat and lazy, I’m probably not going to find it easy to live the life of a healthy, productive woman. Logical. But, we take our thoughts for granted. Only we can change them, and it’s our choice to do so or not.

Where will you start making changes today? That mantra won’t magically change overnight. You’ll have to work at it. You’ve lived with it for how long now?

You might know what Jeremiah 29:11 says. You might know that God has good thoughts of you; good plans for you. But, do you tie His hands with your own unbelief? Do you sabotage His plans with your negative mantras and insecurities?

Whether it seems easy to do or not, - trust Him.

“For I know the thoughts that I think toward you, saith the LORD, thoughts of peace and not of evil, to give you an expected end.” – Jeremiah 29:11 (KJV)

“For I know the plans I have for you,” declares the LORD, “plans to prosper you and not to harm you, plans to give you hope and a future.” – Jeremiah 29:11 (NIV)
Posted by Helen Williams at 10:26 AM 5 comments: Links to this post

"Father, what good is my one, broken prayer?"

The wise old man shared a pebble from his handful. Impetuously, she threw it into the beautiful, calm ocean waters.

After laughing and marveling over the ripples she made, she asked for another. Pebble after pebble brought her great pleasure as she watch the ripples roll out into the distance.

As small waves began to mount, the old man threw his handful of pebbles far out into the deep.

Now, even happier with the waves than she was with the ripples, she teetered on the sand, dodging the splashing water. Laughter rolled from her mouth as she chased the waves, then turned to run away as they chased her.

After she'd had her fill of running and giggling and falling on the beach, she took the old man's hand and they made their way to drier sand to sit down.

Soaked and covered with sand, she plopped beside him and gazed up into his smiling eyes; she admired him more than anyone else in the world.

She laid back and asked again, "Father, you didn't answer me. What good are my simple little prayers? How can they do anything?"

"Little one, do you suppose there's a child in the sands on the other side of the ocean?"

She thought but didn't answer.

"As each of your pebbles plunked into the water, tiny ripples made their way out into the ocean. Suppose those ripples sent waves to the other shore."

"And she splashed and laughed as I did?" she asked with great anticipation.

They looked out over the great body of water.

She smiled and said softly, "Now, she's my friend!"

He smiled down at her. "One little pebble did all that?" asked the old man. "I wonder what one little prayer could do." 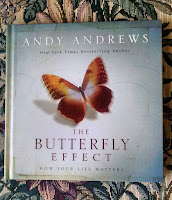 Have you read The Butterfly Effect (How Your Life Matters), by Andy Andrews?

Now called The Law of Sensitive Dependence Upon Initial Conditions, the Butterfly Effect began as Edward Lorenz’s hypothesis that said: “A butterfly could flap its wings and set molecules if air in motion, which would move other molecules of air, in turn moving more molecules of air – eventually capable of starting a hurricane on the other side of the planet.”

You can very affordable get a copy of the book here: The Butterfly Effect
It’s a quick read, minutes, actually. It makes a great gift to those who matter most in your life.

Since YOU matter so much in my life, I’m giving away a copy of the book to one randomly chosen reader who comments on this blog post, whether here on the actual blog site, or on Facebook, my social media of choice.

Insignificant? No. I don’t think so!
You’re impacting everyone. Do it purposefully.

Borrowing a season from my friend, “Happy Lovember”!

“It is too small a thing for you to be my servant to restore the tribes of Jacob and bring back those of Israel I have kept. I will also make you a light for the Gentiles, that my salvation may reach to the ends of the earth.”
This is what the Lord says— the Redeemer and Holy One of Israel— to him who was despised and abhorred by the nation, to the servant of rulers:
“Kings will see you and stand up, princes will see and bow down, because of the Lord, who is faithful, the Holy One of Israel, who has chosen you.”
– Isaiah 49:6-7 (NIV)
Posted by Helen Williams at 9:25 AM 7 comments: Links to this post

It’s easy enough to list them out and expound on why they’re healthy habits.

Exercise – we all need exercise, even those of us who consider it a chore. Actually we’re probably the ones who need it most. Exercise strengthens our muscles, helps rid us of unwanted fat, give us energy, releases endorphins in our brains, relieves stress and lets us prove to ourselves just how strong we really are. What’s not to like about it? Yet, many of us don’t.

Clean eating – logical, common sense. When we eat “junk food” or convenience foods, we’re filling our bodies with chemicals and toxins that can’t lead to anything good except a temporarily content belly. Even our belly complains eventually. That kind of eating leads to more body fat, which leads to other health problems. It gives way to becoming sluggish and we lack desire to do anything. Eating real foods that don’t count on chemicals for flavor and other addictive traits contributes to healthier bodies that serve us better.

Adequate sleep – we know this, our bodies need to be well-rested to perform at their best! Yet so many of us toss and turn well into the night, only to glare at the blaring alarm clock just as we finally enter that restful phase of sleep. We need to rejuvenate like we’re suppose to! I’m preaching to the choir leader here, because I’m up late with the rest of you. But, we know better.

A list of healthy habits could quite long, but this next one could potentially be the healthiest habit we can adopt: thankfulness. Can we make a habit of being thankful? Can we become grateful for all we have instead of daydreaming about all we want?

Think about it. If we purposefully wake up every single morning and reach for that attitude of gratitude before we even put on our glasses, before we stumble to the bathroom, before we throw the covers off – what benefits could we quickly see unfolding in our day?

Every November we pull out our lists of what we’re thankful for and post them on social media for all the world to see. And, yay – sharing them is great! But, what if this year, we put a little more pondering into our gratitude? It’s pretty easy to write out a list of things we thank God for, perhaps even getting carried away with how long our list is becoming. If while we’re writing out that list, or even just composing it in our minds, we actually take the time to say thank You to Him, the list making might take longer and be even more fulfilling.

Plus, He loves to hear from us!

If it’s not a habit already engrained in our lives, it’s an addiction that will benefit all of us. Making new habits is much easier than breaking old ones. It makes sense that building new habits that will eventually replace our bad habits will erase the need to battle the ones that were dragging us down.

Posted by Helen Williams at 10:15 AM No comments: Links to this post